With a highly developed and successful free-market economy, the city-state of the Republic of Singapore is a sovereign island strategically-located off the southern tip of the Malay Peninsula, east of the Strait of Malacca, and just one degree north of the Equator. Composed by one main island and 63 small islets, with a total of about 719 km², Singapore is one of the smallest countries in the world. The founding of modern Singapore dates back to 1819 when the British East India Company established a trading post between India, China and SEA on the island, becoming a British Crown colony in 1867. Its prosperity increased rapidly with the opening of the  Suez Canal and the Malaysian rubber’s exports. Between 1920-40 great naval infrastructures were constructed, which laid the foundations for the port of Singapore to become the world’s 2nd busiest port in terms of total shipping tonnage (37.2 million TEUs) nowadays.

In 1965 Singapore became an independent state, a new nation under the ideals of democracy, peace, progress, justice and equality. As a result of being a prominent maritime trade hub, Singapore’s society is a melting pot of diverse cultures, races, and religions where every one is encouraged to preserve their uniqueness and traditions, and to respect and appreciate others.

At the TOP of world’s rankings 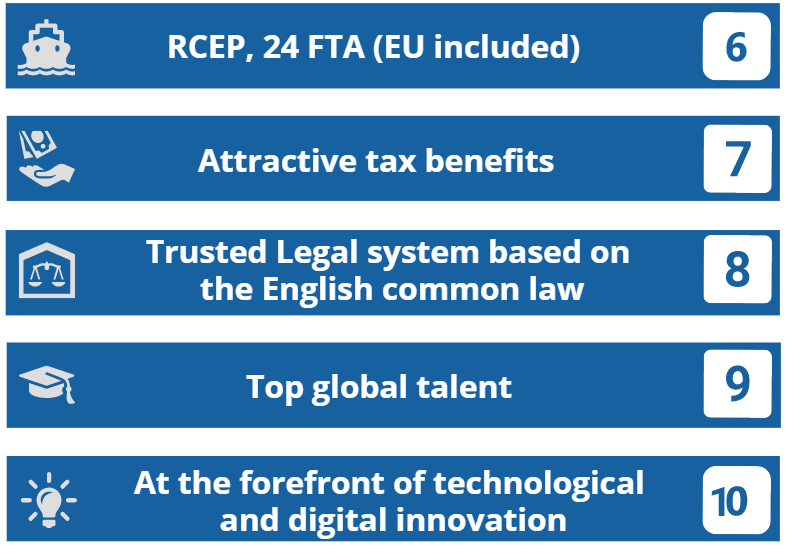 Singapore is the commercial, financial, logistic and technology hub of ASEAN

A perfect business destination to expand to new markets in Southeast Asia.

An open and corruption-free environment, stable prices, the  9th highest GDP per capita and a very low unemployment rate, among other factors, have ranked Singapore’s economy as the most competitive in the world (IMD ranking and The Global Competitiveness Index 4.0 2019 Rankings by the World Economic Forum) as well as one of the most stable.

Three are the main pillars supporting a $372B (2019) economy: 1) a highly robust specialised manufacturing industry aim at exports, 2) the attraction of foreign investment and 3) a strong well balanced high value-added service sector.

The main sector, which accounts for 8.5% of its GDP, is the manufacturing of computer, electronic and optical products, particularly integrated circuits/ semiconductors alone accounting for the 7.8% of GDP. It is a specialised technological high value-added industry, largely automated, with a high-skilled labour force and an advanced 4.0 industry. Four sectors are responsible for 85% of its total value:

Close to 95% of the semiconductor and more than 80% of the pharmaceutical output is exported. Integrated circuits exports alone accounted for almost 35% of total domestic exports. Singapore is the 3rd country with the highest export-to-GDP ratio, (319%) which is an indicator of its economy’s globalisation. 50% of $412.6B goods exported in 2018, were domestic exports and the other 50% were re-exports.

2) Singapore receives the 3rd largest inflows of foreign direct investment (FDI), in the world  which has increased by 350% since 2009.

HQ of up to 7,000 foreign companies, financial and insurance services are the sector taking over 50% of the funds.

Europe (31%) is the largest investor at a regional level, whereas USA is the largest one as country level (17%) followed by the Netherlands (7%). The EU contributes 19% of FDI flows ($240B) invested mainly in 4 sectors:

The Digital economy stands out contributing $12B in 2009, 60% more than in 2015 (there are 9.1M mobile subscriptions) as well as the increase in financial and insurance services, which has folded since 2009. 131 banks are operating in Singapore, of which only 5 are local. In terms of operating receipts Info & Comm was the fastest growing (13.4%) industry between 2013 & 2018.

In Merchandise imports, the integrated circuits (17%) and the oil and petroleum products (22%) stand out, although the latter has experienced a 24% decline since 2012. Integrated circuits, diodes, pharmaceutical and cleaning products have experienced the greatest expansion. China, Malaysia and USA are the main origin countries of imports.

1970, the origin of the prosperous economy

At the beginning of 60′, Singapore’s economy was undergoing a tough time:

– Lack of natural resources and land

In order to address these issues and with the aim of building a robust and stable economy, Singapore Govt.  implemented a long-term strategic plan based on  the industrialisation of the economy and the promotion of foreign investments. During 60′ and 70′ :

These measures resulted in a rapidly boom of exports value and the full employment achievement in 1972. Take advantage of the opportunities this market is offering you

Learn more
We use cookies to ensure that we provide the best user experience on our website. If you continue to use this site we will assume that you agree. Privacy PolicyOk